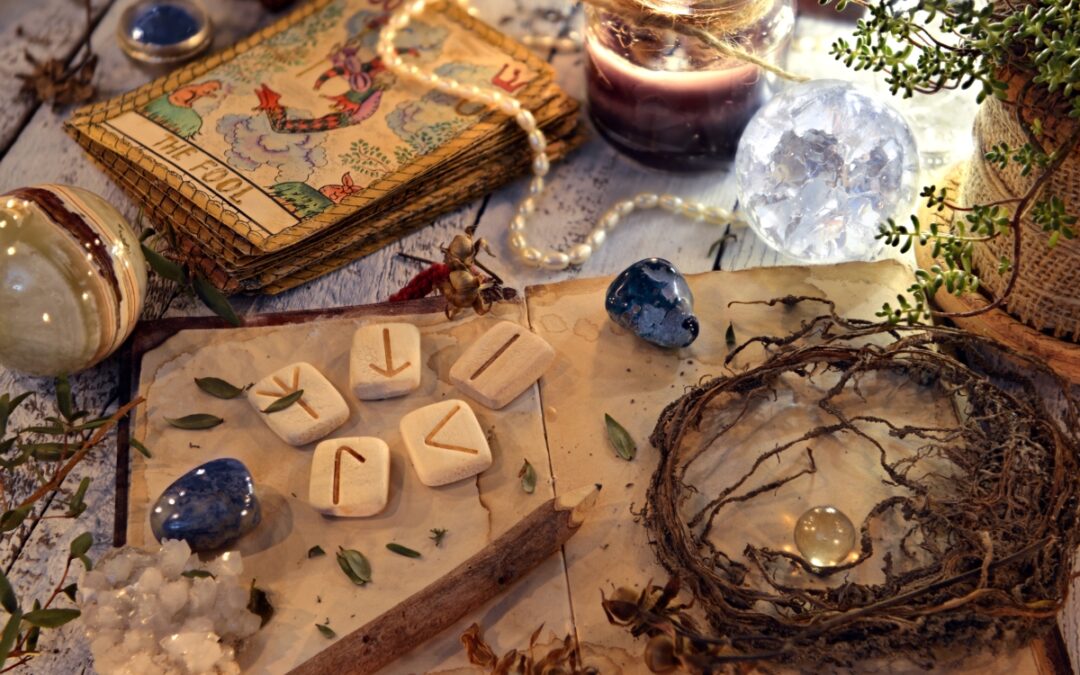 Divination: The practice of seeking knowledge of the future or the unknown by supernatural means; the art of knowing without knowing why.

Divination is a widespread cultural practice that takes varied forms worldwide. It can be diagnostic, forecasting, and interventionist, in the sense of changing your destiny. Divination is found in all civilizations, both ancient and modern, the practice of determining the hidden significance or cause of events, sometimes foretelling the future, by various natural, psychological, and other techniques.

Divination practices are often based in nature, taking form through its elements. It can be done with things, such as tea leaves, bones, nuts, and water, as well as cards, and other non-nature-based components.

Today, it is encountered most frequently in the form of horoscopes, astrology, crystal gazing, tarot and oracle cards readings.

A passion for the knowledge of destiny has led us to the practice of divination.This ancient art form was used by our ancestors, for answers and insights into the past, present, future.

Perhaps, the practice is as old as philosophy itself, and it returns humankind, absorbed in our spiritual task, to reflect on the present. The present is a midpoint between past and future. The past is in fact, the essential point of divination: if we succeed in decoding an omen, then at times we can understand the intermediate state corresponding to our present. Understanding the present circumstance, helps to pave the way forward, the future.

Is one of the simplest and easiest forms of divination. It’s a simple matter of Yes/No questions being asked and answered. There are several different ways you can use a pendulum for divination — you’d be surprised what you can learn with “yes” and “no” answers. The trick is to learn to ask the right questions. Pendulums are readily available to buy, but you can also make your own.

Long ago, according to the epic sagas of the Norse people, Odin created the Runes as a gift to mankind. These symbols, sacred and holy, were originally carved into stone. They were used for divination, legal documents, and letter writing, as they have their own alphabet. Over the centuries, they evolved into a collection of twenty-four letters, each with a metaphorical and divinatory meaning. Runes are readily available and if inclined to do so, make your own.

There are numerous methods of divination that people have used since time began. One of the most iconic is the notion of reading tea leaves, also called tasseography or tasseomancy. This divination method is not quite as ancient as some of the other popular and well-known systems and appears to have begun around the 17th century.

For some the Tarot can seem a little scary, with links to the occult! This is not so; the Tarot has been around for over six hundred years and started life as a parlour game. It was not linked to the occult, till around the 18th century.

To people unfamiliar with divination, it may seem that someone who reads Tarot cards is “predicting the future.” However, most Tarot card readers will tell you that the cards simply offer a guideline, and the reader is simply interpreting the probable outcome based upon the forces presently at work. Think of Tarot as a tool for self-awareness and reflection, rather than “fortune telling.”

Scrying is probably the oldest of all methods of divination, scrying was practised by many ancient cultures, even to the point of reading the reflections in the water. In ancient Egypt, scrying was practiced with the aid of ink. In ancient Mesopotamia, bowls were filled with oil. Ancient Greeks found meaning in the reflections in mirror and on metals, while the Aztec tlatoani read the reflections in obsidian. The practice of scrying led to eventually to the readings of crystal and the powers associated therein, resulting eventually in the crystal ball to see the future.

Are you looking for a Psychic or Intuitive reading to give you guidance and support? I offer psychic and intuitive sessions HERE.

Would you like to discover more about Divination, Psychic Readings and Development? I offer 121 coaching, classes and mentoring with regards to developing as a Psychic Intuitive.

To arrange a complimentary discovery, call to find out more, contact Anita Denise at anita@anitadenise.com